Beyond Mission, Vision, and Values: Inspiring Your Workforce | Emplify

Beyond Mission, Vision, and Values: Inspiring Your Workforce If a Tree Falls in a Forest…

(February 21, 2017) — Would you follow you as a leader? This question is often used to frame conversations around leadership styles and the kinds of things leaders can and should do to inspire and motivate their employees.

The problem with this question is that it attempts to get leaders thinking about what others think of them—but it’s always done through the lens of the self. It’s so inward facing. There are many answers that arrive at “yes I would follow myself” but fail to help leaders gain insight into their leadership practices because they can’t move beyond their own self-perceptions, which may be inaccurate. It’s easy for a leader to say she would follow herself if she is completely unaware of her faults or even what her workforce really wants out of a leader.

Asking a leader if she would follow herself is a bit like asking if a tree that falls in the forest makes a sound. A leader can be confident in her desire to follow herself but if there’s no one around to, well, actually follow her, does her confidence really mean anything?

While inward-facing personal reflection is a proven technique for helping people evaluate their leadership skills and determine areas of improvement, some aspects of leadership are highly dependent on factors outside the leader him or herself and can only be understood by looking outside of leadership.

Management literature has consistently promoted the importance of organizational missions, visions, and values statements in communicating to employees and customers the reasons a business exists. Typically, these statements are created by leadership or high-ranking employees working as delegates for leadership and are based on leadership’s vision for the future of the company and values they believe will get the company there.

But transformational leadership theory goes beyond these two inward-facing methods by acknowledging the role of workers in achieving missions and visions and setting the values of an organization. This acknowledgement is captured in two outward-reflective methods for leading workers: 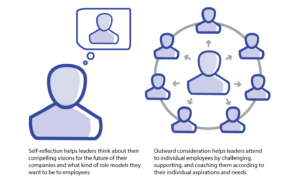 Meeting in the Middle to Drive Engagement

Idealized influence and inspirational motivation exist when leaders are motivated by a clear vision, an understanding of how to achieve it, and a concept of the kind of role model they want to be. The result of leaders trying to exert influence and inspire their employees often takes the form of mission, vision, and values statements.

But for leadership to successfully maintain followers and avoid being a soundless tree falling in a forest, leaders must also exert intellectual stimulation and individualized consideration. This means meeting their employees halfway between the organization’s mission, vision, values and workers’ own values and perspectives, which may not exactly align in the tidiest way.

Essentially, it’s not enough for leaders to have a strong vision and model it to their employees. For workers to be engaged, they must feel that their individual identities are recognized in the workplace and they must be able to connect what they do to the company mission, vision, and values.

Employees should feel that they are being led and engaged with (not to)—that the mission, vision, and values capture something true about themselves and their role in organizational success. Attempts from leadership to “inject” a strong vision into a workforce like a bolt of lightning will only leave workers charred and burned.

“Instead of trying to energize their workforce, great leaders ought to hold a mirror up to their employees so their employees can see that they have the energy they need within themselves.”

Instead of trying to energize their workforce, great leaders ought to hold a mirror up to their employees so their employees can see that they have the energy they need within themselves. This means caring deeply about understanding and recognizing workers as individuals and being open to learning and reinforcing each worker’s own personal mission, vision, and values. When leaders know what motivates their workers, they can better develop missions, visions, and values that capture not only their own desires but those of their workforce. This eases the burden of trying to align workers to missions, visions, and values since they will already have a clear connection.

Finding the Middle Ground for Mission, Vision, and Values

Unfortunately, decades of command and control style leadership have left many leaders feeling that workers simply have nothing to contribute to the business’s mission, vision, and values. There is no “middle” ground to meet on with that kind of belief. One engagement expert expressed that feeling this way: “Employees wake up every day all over the world not knowing why they do what they do for 8-12 hours of their day.”

The truth is that many workers know exactly why they do what they do. Take a look at these examples from the wildly popular site Humans of New York, a man-on-the-street style photography project that captures the stories of a diverse set of people in New York City:

These and many other workers know exactly why they do what they do for 8-12 hours of their day. The fact that their stories were captured in brief man-on-the-street interviews should demonstrate that understanding those “whys” isn’t all that difficult if leaders will only ask.

Workers know why they go to work every day, but when the mission, vision, and values are handed down from above, they can’t see how their personal why fits into them, leading leadership to believe that workers feel purposeless.

Meeting employees halfway means having mission, vision, and values statements but also including room for workers to express their own reasons for doing the work they do.

Ask Employees Where They Stand

So what can leaders with mission, vision, and values statements do to meet their workers halfway? If leaders want to better know the “whys” their workers already have in order to bake them into company mission, vision, and values statements, there are several paths to get them there. The hardest (but perhaps most rewarding) path is to talk to workers and capture their “whys” either through in-person interviews or workforce polling.

Questions that get at individual identities and allow employees to express their personal “whys” include:

Once a leader knows the answers to these questions, they can start to see the missions, visions, and values that their workers are bringing to work every day.

Working the answers into the company mission, vision, and values could take a variety of paths but primarily involves re-crafting values to reflect those that workers already hold. For example, if a leader finds that her workers report they are overwhelmingly motivated by a desire to help others, that service value needs to be added to or more strongly expressed in mission, vision, and values statements, ideally in the language workers use themselves.

Use This Hack to Find a Halfway Point

For organizations who want to get started today, don’t have the resources to talk to everyone individually, or just need an easy solution, research into workforce “whys” provides a handy hack to finding the halfway point in the form of “work orientations.”

Instead of understanding each worker’s specific why, leaders can more loosely categorize employees into their orientations to better understand the most commonly shared themes. A leader at an electrical services business may suspect, for example, that most workers have a craftsmanship orientation. From that understanding, they can rework their mission, vision, and values to focus more on the quality and professionalism of specific work tasks and less on statements that don’t appeal to craftsmanship-orientated-workers as much as statements about customer service satisfaction.

In lieu of actually determining each individual worker’s orientations, however, organizations can also attempt to capture individuals’ identities in mission, vision, and values statements by being sure to include something for each work orientation in their company statements:

…The Sound is Heard by Those Standing Near

Ultimately, leadership is more effective when employees are willing to follow. And employees are willing to be led by leaders who demonstrate that they not only listen to them, but care for them as individuals and value their unique contributions. Culture isn’t about forcing a certain belief system or way of doing things but rather allowing the naturally dominant beliefs to arise. For those who don’t share these naturally dominant beliefs, acknowledging subgroups and differences ensures everyone has a place in the organizational culture.

Meeting employees halfway between what you as leaders want and who employees really are through sound mission, vision, and values statements sends the message that everyone is different, but there’s room for those differences in working together to make or do something great.